Make way for the next best selling author . . . Patrick O’Scheen!

The day I first called myself a writer, I cringed at the very thought. I heard the reply in conversation, “And…what do you write?” While the obvious answer would have been ‘books’ or ‘novels’, ‘fiction’ or ‘fantasy,’ I winced at the idea of letting anyone know that I had put my very soul on paper. I felt like I would have been on a street corner, exposing myself in public with words. I hid from the very notion…and I’m still hiding today.

The things that have run through my mind about my profession and myself at times amaze me. I have read articles calling the essence of what I do a craft…and maybe the actual telling of a story involves crafting. One needs to know where the commas go and how a sentences gets from the brain to the paper. However, there is much more than mechanics involved…or at…

This is just a short list of things you can do to help keep life with your Writer a little more comfortable for the both of you. Whether your Writer is your wife, room-mate, sister, daughter, or strange person who comes over in her sleep to use your computer, using these tips could make things a little easier.

(Disclaimer: Every Writer and situation is different. If you discover that your Writer does not like any one of these tips please discontinue its use and attempt to find a suitable substitute. Also, the Writer is referred to as ‘she’, this is simply because I am a female Writer and have no knowledge of what it is like being a male Writer. Sorry.)

…I’m sure if yeez dig deep enuff into the Great God Google yeez can find out what age authors(esses) were when they wrote their various masterpieces… I’m equally certain there will be no common specific age when this tome or that tome came streaming from these assorted cerebral creative minds… the fascination that news channels and journalists have with quoting the ages of people featured in the broadcasts and newspaper columns is kinda strange to me… yeez know the kind of thing… ‘…snake charmer, Wally Wombat (aged 93) marries ferret breeder, Millie Mortifia (aged 22) at Winchester Cathedral (aged 1178)…’ or ‘…wunderkind prodigy, Bert Bangaloo (aged 3 1/2 months) wins Nobel Mathematics Prize…’ …it’s almost an obscene obsession with relating how long a person has been breathing to the gist of any story that the WURLD has to see… does it matter, Mabel?… the reason I ask emanates from my… 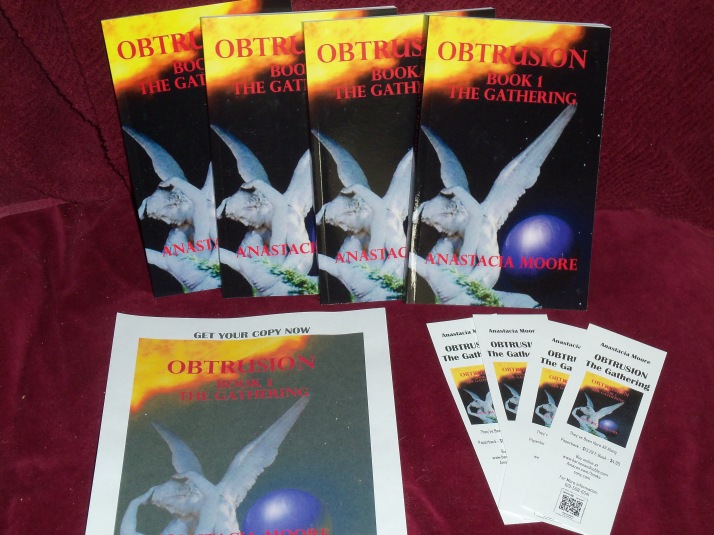 From November 25th through November 30th, Obtrusion Book 1 The Gathering is available for free download on Smashwords. In exchange for your FREE copy, all I ask is an honest review on Amazon, B&N, Smashwords, etc., as you are able to provide upon completion of reading the first installment of the OBTRUSION trilogy. Please email me for the code to receive YOUR copy, or leave a comment. Thank you!
https://www.smashwords.com/books/view/373199

Steve will be missed by those who admire and respect him, but his words will go on for eternity. God Bless him!

Since Dad left to pursue his new investigations for the next story, we as a family have been inundated with messages of condolence and support. So much so, that Thank You seems so inadequate.

For those of you who have your own blogs, and have shared this news with your followers, friends and fans, then, again, those very inadequate words appear, Thank You.

While there are times that I speak for the entire family, I cannot always claim that. I would like to let the Imagineer Blog, not carry exactly, but still be available for the information it contains, as well as links to books that readers may not have yet.

I also am working to create a memorial Blog for dad. I would also like impressions from his friends, fans and followers. If you would like to take part in this project, please feel free to write something. If…

I am thrilled to already start receiving 5 star reviews on my latest release: “Obtrusion Book 1 The Gathering”. Please enjoy a small excerpt. And Thank you for visiting my page.

She glanced up at the clock on the wall. So far, it had only been forty five minutes since she had begun. It normally took anywhere from an hour to an hour and a half to perform a simple embalming, but she was in no hurry this evening. She was paid the same no matter how long it took to finish.
With the lower torso complete, Molly moved on to the head. She was nearly done, just the final details and she could call it a night and get some much needed rest. She had already finished eight embalming procedures earlier that day, three here, and five at two other mortuaries. That was the one thing she liked about being a “freelancer”. She wasn’t stuck working at the same place day in and day out. Her mentor and friend David Mohr had instilled that idea in her.
Stifling a yawn, Molly proceeded to pat the curly brown hair dry after she had cleansed it with germicidal soap. She used the scissors to neatly trim along the nape of the neck. As she was combing the hair neatly into place and smoothing it with her other hand, she felt the baseball sized lump on top of his skull.
“That’s odd,” she thought out loud. “If he fell any distance and landed squarely on top of his head, not only would his skull be fractured and bloody, but who in the world lands head first from a hiking accident?” Without much further consideration, she figured he must have hit his head on a rock. Still, there was no blood from the wound.
His body had no other cuts or bruising. Molly shook her head and continued with the task at hand. Retrieving the eye caps from the utensil tray, she carefully lifted the closed eyelids and inserted the pieces under them. They covered his dark brown eyes and gave him the appearance of a zombie with no pupils– until she closed the lids back over them and applied a few dots of super glue to keep them closed. The eye caps would keep the area from having a sunken look at the viewing in the morning.
She was yawning more frequently now, and needed to get this one done and get home and rest. Tomorrow she had a busy schedule, and there was no telling when she could receive a call on another case.
The curved needle was cold in her hand, even through the latex gloves. She threaded the string through its eye. Pulling his lower lip down, she inserted it through his jaw below the gums, then stuck it through the upper jaw into the right nostril, then through the septum of the nose into the left nostril, where she would pass it back down into the mouth to create a natural appearance. When she tried to push the needle through the septum of the nose, which is mere cartilage, it stopped with a “tink”. She slipped it back a tiny bit and tried to force it through, but it wouldn’t budge. There was something definitely metallic in the septum.
She wondered if this guy had perhaps broken his nose and had some type of metal structural piece inserted to hold the formation, but that was something she had never heard of . . . using metal or even titanium prostheses in the nasal cavity.
She retracted the needle from the septum and carefully laid it against the chin. There was a portable x-ray scanner in the cabinet and she plugged it in. Hovering the device over the nose, she saw it. There was something metallic but it wasn’t a pin. It looked like some kind of flat circular microchip.
Molly’s heart skipped a beat. She wasn’t sure what it was, but she knew it didn’t belong there. She snatched the scalpel from the tray, and carefully cut away a small portion of the septum where the metallic object was imbedded. It was about the size of an eraser head. When she cut away the cartilage surrounding it, she discovered that it was no thicker than a dime. It appeared to be solid, and upon wiping it dry with the towel, it was as bright and shiny as glass. She retrieved a small zip pouch and dropped it into the bag.
Outside, something rustled through the bushes just along the side of the building. Molly heard a noise like footsteps. She stopped cold in her tracks, still holding the bag in her hand. Her breath caught in her throat as she focused on the sound.

An extremely talented photographer, Patrick, who lives in such a beautiful area for creating his photographs.

sometimes the path is long. It twists and turns and confuses.

Even obscured, the end is always in sight.

Brambles may block the way…

However the view is clear ahead.

May you find your way.

Have a wonderful Sunday!

Thank You Chris, you wonderful ape for sharing!

I was well into my teens before I realized everybody else in the world lived their lives sequentially. I can see the advantage to doing things that way. I just don’t have the luxury of choosing to do so. The matrix glitched for me.

Ever since I was a child, I knew that my death was going to be hilarious. And I’m okay with that. It has a way of removing fear from my life, since I know. And when I do think of dying, it makes me laugh. Even still. Some jokes never get old.

Nightmares are cool. I used to think horror films were funny. They looked so fake. But as the monsters became more realistic, they started to match with my dreams. Now I just think they look awesome. Besides, that’s not how I die. So nothing to be afraid of.